Look around a wine store, and it won’t be long before you see the words “old vines” on a label. The term is becoming more popular to give the impression that the ancient vine juice before you is of the highest quality—but how much of this is marketing spiel, and what does the term actually mean?

In simple speak, old vines are just what they sound like: grapevines of a significant age. The trouble is, there’s no official oversight as to how old a vine has to be to get the title. Some believe 15 years is enough; others say 25, 50, and even 100 years are the minimum brackets needed to meet the criteria needed for old vine status.

Given the lack of legally binding guidelines, vines as young as 12 years are sometimes being given the title, meaning wine lovers need to be aware of exactly what is going in their glass. While some wines will clearly indicate the age bracket of their old vines (25, 50, 100+), many do not.

To that point, here is a list of words used to identify old vines across some of the major wine-producing countries. 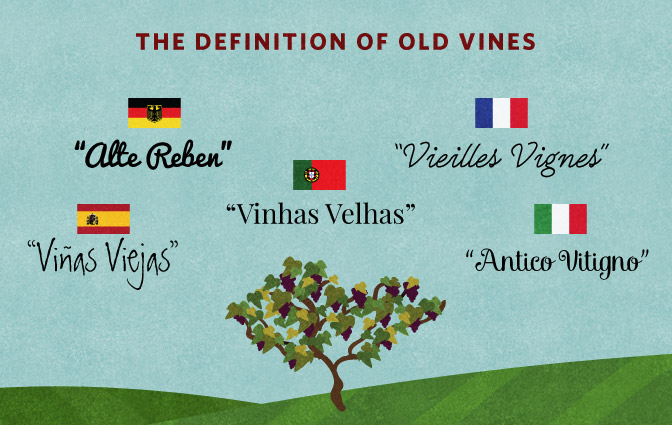 What Makes Old Vines So Special?

While a typical vine can continue to produce berries for up to a whopping 120 years, their yields will gradually decrease over time, meaning fewer berries will be produced. As the vine ages, it shifts focus from producing multiple berries to making fewer berries of much higher quality. This means that older vines will produce grapes that are more intense and concentrated flavor, resulting in outstanding wines.

In addition to producing fewer grapes over time, the vine’s roots continue to expand into the soil. As the roots dig deeper, they are able to access a whole host of nutrients, which in turn will affect the flavor profile and quality of the berries. 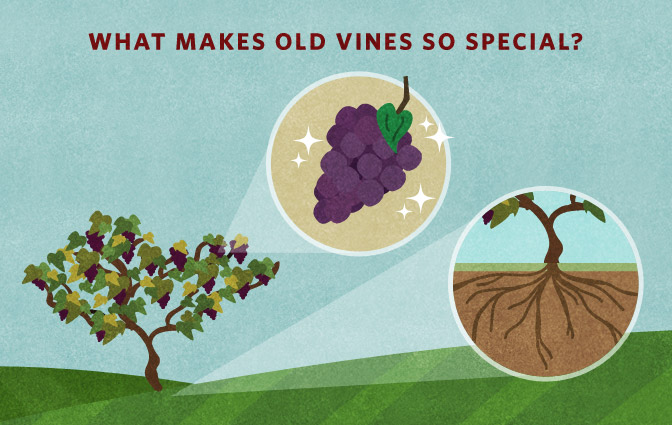 Because grape-growing technology has improved, winemakers are now able to prolong the lifespan of their vines. A process known as the Cordon Renewal allows winemakers to keep vines more productive over longer periods by selectively pruning the branches (cordons) much closer to the trunks.

If in doubt about a wine, just find it on Vivino; a quick check through the tasting notes of others will give you a good indication as to whether the wine lives up to the expectations.

An ‘old vine’ wine should have a very concentrated taste with a lot of depth, boldness, and intensity. If the wine is described as weak or lacks structure, it’s possible those vines aren’t really old enough to do the trick for your tastebuds.