Everything You Need To Know About Tuscan Wine in 600 Words

For many people, exploring and learning about Italian wine is a little daunting! There are so many regions and styles, it’s easy to be overwhelmed. Standing out among them all is Tuscany. Tuscan wines are some of the most popular produced in Italy, and also arguably some of the very best. If you want to find out why they’re so beloved and which ones to try, you need this three-minute guide.

If you’re a wine lover, you’ve probably already started tasting Tuscany. Although only 6% of all Italian wine is produced in there, its reputation is huge. Who hasn’t had a Chianti Classico or an mind-blowing Super Tuscan? The good news is: there’s more to Tuscan wine than those two styles, and they offer consistent quality and often great value. We’ll help you discover some gems.

Tuscany is one of 20 official Italian regions, located in the central part of the country. It is divided into two main areas:

Then of course, we’re in Italy, so there are plenty of small villages each with their own little sub-region. Here on Vivino, we reference no less than 62 of them! About 360 million bottles of wine are produced in Tuscany each year. 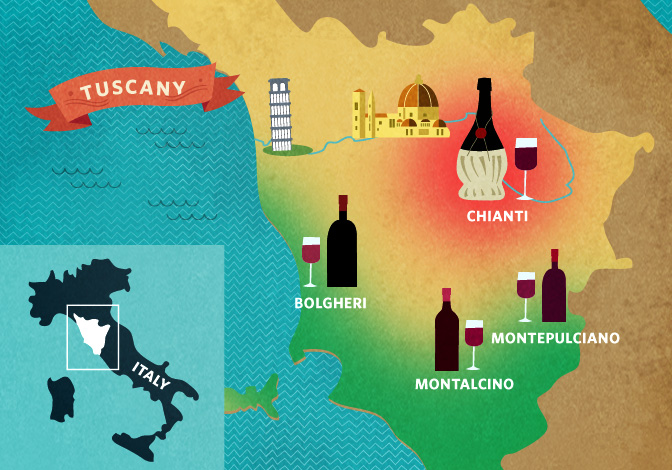 Why are Tuscany and Tuscan Wine So Famous?

The ancient fame of Tuscan wine is undoubtedly related to the region’s prestigious history. It exports incredible wine and incredible people. The Italian Renaissance started in Tuscany, and the Medici family, Leonardo Da Vinci, and Michelangelo are all Tuscans. Perhaps there’s a drop of genius in Tuscan wine?

After World War II, Chianti wines became famous when Italian restaurants proliferated around the world, serving it in the distinctive fiasco-shaped bottle (the one in the straw basket). For a time, Chianti had a reputation for cheap, low quality wine, but that’s no longer true.

What is Super Tuscan Wine?

Super Tuscans are wines that do not respect the winemaking requirements for the production of traditional Chianti wines, mainly because they include Bordeaux varietals in the blends. Famous producer Antinori pioneered the movement introducing Cabernet into his Tignanello in the late 1970s, when Chianti was suffering from decreased popularity. Famed critic Robert Parker became one of the style’s strongest advocates.

87% of Tuscan wine is red with a staggering dominance of the local star Sangiovese followed by French grape varieties:

What To Drink From Tuscany

As I learned in Discovering the Top 25 Most Popular Italian Wines, 17 out of the 25 most-scanned Italian wines are Tuscan. This includes superstar Chiantis and Super Tuscans.

If you want to pick up a few bottles of Tuscany’s best, look for highly rated ones in these styles: Chianti, Chianti Classico, Brunello, Vino Nobile di Montepulciano, Brunello di Montalcino, and Bolgheri.